Because it was my birthday, we had a family outing today. We went to the Long Beach Aquarium today. It was a good time. Once upon a time, I wanted to be a marine biologist. I would have been terrible at it, if there was math involved. And, there usually was. But, I still like fishes and other things that live in the sea. 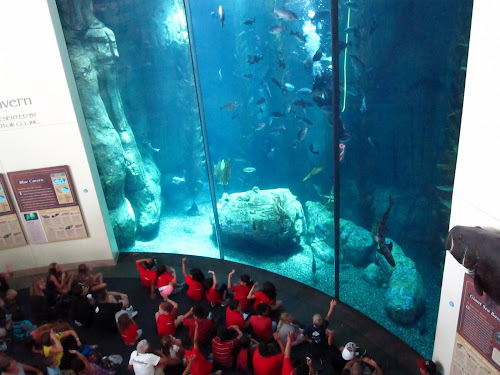 Plus, the kids had asked that one of our summer activities be that we visit the aquarium. They are such nerds sometimes, always asking to go to museums and stuff like that. 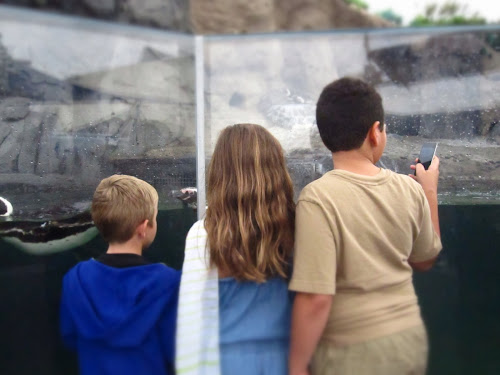 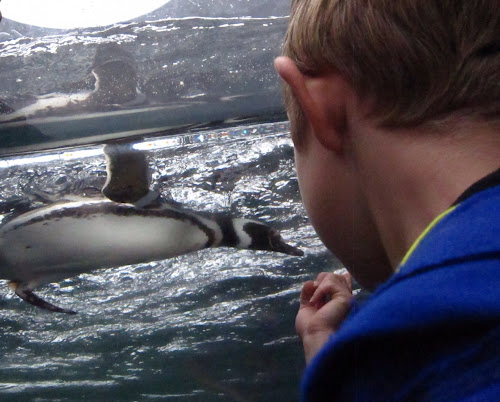 So, we checked out all kinds of fishes, seals, sea lions (which have ear flaps, seals don’t), sharks, rays, penguins (from Argentina, I think), jelly fish, and so forth. Good times, in my opinion. 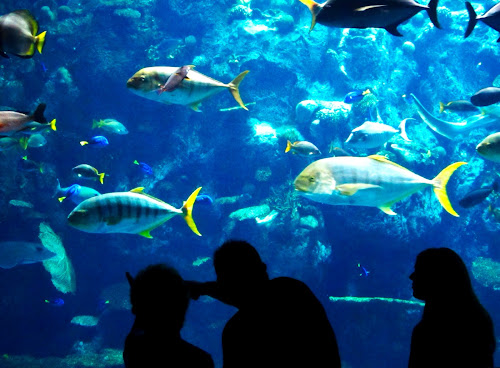 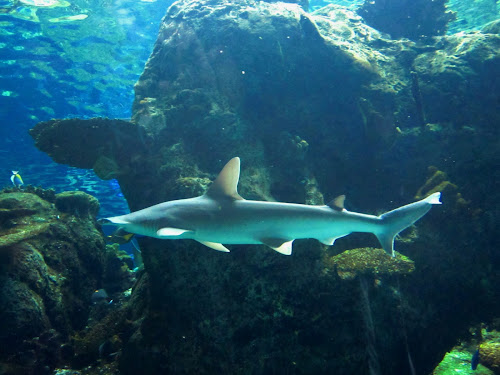 Then, we had dinner at a sushi restaurant. It wasn’t thematic on purpose, but there was something kinda fitting about looking at fish and then eating them. It was even ironic since part of what they told us about today was the overfishing of the oceans. The oceans are really big. But, it turns out that we are capable of overfishing and we are having an impact. It’s not that we can’t eat fish. But, at some point, we are going to have to change the amount we eat and the way we harvest them

So, yes, another year older. And another year wiser? I think so. Not that I would be considered among the wise universally. In fact, I am sure that there are a significant portion of people who would straight out, without hesitation, label me a fool. I like to think that some of my wisdom is that this really doesn’t matter. When the physicist first wrote of the existence of the Higgs bosun, people thought he was daft. I found out this year that President Franklin Rooseveldt was hated by a good portion of the U.S. population and people thought he was doing a horrible job of bringing our country out of the Great Depression (which may have been true, since many agree that WWII is what ultimately turned the economy around) even though today most would say, especially given that he is the only president to be elected three times, that he is one of the better, if not among the best presidents in history.

One thing I learned these past couple of years is that just because people don’t agree with me doesn’t mean I’m wrong. Sure, I should reflect and consider if they are right. But, having done that, checking with a trusted advisor, I can then stand by my convictions. I have learned this last year that, actually, many people that are adults can be childish and very wrong, even some I used to respect a great deal. I have had to learn to deal with betrayal and loss, as we all do, I think. I have also learned to be happier, too. Happiness really is, to some degree, a choice. I have not had to deal with a great many horrible situations, so it’s hard for me to say with total certainty. But, it sure seems to me that our outlook on life can go a long way toward happiness or misery.

It’s been a pretty good year. I have enjoyed good health as has my family. I have maintained employment. I have had all of my basic and not so basic needs met. There is room for improvement, but by and large I consider myself to be in pretty good shape. I reckon I am enjoying an above-average life and I’m grateful for it. All of this is to say that I am glad to be living this life, consider myself lucky, and hope I am giving back some of what I have gained.

Speaking of that, I thought I did an okay job teaching this last year. I think there are definitely some things to improve there, as well. But, I liked that I was able, more often than not, to focus on the standards for the students, rather than “covering” material or completing assignments. I was not able to create the “open” style of teaching that I had hoped for, that students would direct their own learning and I would facilitate. But, I do think kids in my classes learned and most of them ended up better than they began. I hope this year is even better.

Sadly, the only reason to do this is my own personal integrity and work ethic. I still think that our educational system is in very bad shape. I’m sure it comes as no suprise to you that I don’t blame teachers, for the most part. I don’t mean to say that all teachers are good. But, I will say something I have said before: if there is a bad teacher, then that means they have a bad administrator. In eleven years teaching, I have not witnessed a union rep actively defending poor teaching or bad behavior by a teacher. I have seen them insist on due process and insist that administrators do their jobs. But, one thing I have witnessed many times, especially in the last five years, is administrators walking away from bad teaching. I have heard them rationalize why they don’t confront a poor teacher. I have seen them ignore bad behavior by teachers.

So, next time I hear someone complaining that you can’t fire a bad teacher, I want to see the paperwork. I want to see the write-ups, the memoranda, and the counseling. I want to see that the administrator did formal observations and followed up with the teacher. It’s honestly quite baffling to me that people pretend that teachers are these free agents in their classrooms, with total liberty to create and implement the curriculum and that if an administrator tried to, I don’t know, do their job, that all the teachers have to do is cry, “Tenure!” and the principal will disappear in a puff of smoke.

In practically every other job in the world, if an employee does stupid things we inevitably ask, “Where was his supervisor?” Except in teaching. If an administrator can’t fire a teacher, then it’s probably because they failed to observe and document their supervision.

A really odd thing to me is that, despite being forty-one today, I don’t feel like an adult exactly. I mean I realize I am one. But, it’s as if I have to remind myself that I am not a young man any more. I am officially middle-aged. That’s so odd to me. There’s a pretty good chance that I have lived half, or more, of my life. I kinda hope I live longer than 82, but given my ancestry, I think it’s a pretty good bet that I won’t quite make it to 90. Then again, we seem to be living a little longer, accidents notwithstanding, every generation. So, maybe.

But, I still feel like the youngest guy in the room when there are other adults around. I’m not sure why that is. And, it’s not just me. Yesterday, a couple of my students in summer school said, “It’s your birthday? How old are you going to be?” I answered and they were surprised. “That old?!” According to them, they had thought I was in my late twenties. Granted, these are teenagers who are, techinically speaking, brain damaged. But, still, most people place me in my thirties. So, that could be a part of it. Still, I keep waiting for when I will feel “old.” I realize I’m old. I see that the ’80’s, my high school decade, are considered retro and cool. It is what the 60’s were to me, I guess; an almost mystical time period when super neat stuff happened and I missed it.

So, maybe that’s it, though. I’m realizing that people are often wrong, even adults older than me, that they are fallible and make mistakes. Selfishness is a primary motivating factor for most people (and me, too) and governs the majority of their decisions. I like to think that realizing I’m selfish means I can stop myself sometimes and act better.

I remarried, officially, this year. I am absolutely smitten with my wife and adore her beyond anything I had ever imagined I could. I have learned that marriage is not a piece of paper. Or, rather, it is. The decision to be a couple, to be partners, however, is not. A legal marriage is a legal document representing a business decison to merge two people into a legal entity, I think (I am oversimplifying, but IANAL (I am not a lawyer), so I’m just talking out my neck here). My wife and I decided a couple years ago that we would like to be partners and that we both intended that it be for the rest of our lives. The ceremony was a formality, in both of our eyes. And, this is a reason I adore the woman. She agrees with me on this. We didn’t want to spend a bunch of money on all kind of fanciness. But, we wanted to be legally, offically married. So, we took care of that.

My wife makes me want to be a better man, a better father, and a better teacher. I don’t know about you, but I think that’s a pretty good quality. Just by being who she is, I am inspired by her to do better and be better. I’m sure I’m not always better, but I am at least inspired to try to be better. Some people don’t even try. On my birthday, upon reflecting on this last year, I think she is a significant part of my happiness and contentment this year. She is an extraordinary person, some days the smartest person I talk to (most days), incredibly generous, fiercely loyal, stunningly beautiful, and, most shockingly, in love with me. I have to admit that I find that last part very attractive indeed.

So, tomorrow I plan to take a bike ride with the Cycling Connection. I’m hoping to get close to 50 miles total on the bike. I will have to see how the knee feels about that, though. I just found out that the Death Valley Century is still accepting registrations. I would totally love to cycle through Death Valley. But, a friend of mine, Mike, says they have awful winds sometimes, too. There are few things as soul-killing as winds when you’re on a bike. If they are behind you then it is amazing. But, if they are across you or against you… forget it. I would rather, I think ride in the rain than in a stiff wind. We can get hella bad winds all by ourselves in Fontana. No need to pay $100 to ride in the wind.

But, it is in Death Valley. So, there’s that. That century is schedule for October 27th. I think I could be in shape for it by then, if I keep up my recent progress. I’m keeping it in mind.