Yesterday, I endeavored to take a longer ride, still in training for my Highlander Century. So, I went out to ride with the Cycling Connection. I left the house late and met up with another rider a few miles out from the meeting place. I drafted off him for bit. He was obviously much stronger than I and we were cruising along around 23 mph. I offered to pull for a little, as it was polite, and did so. But, our pace dropped a couple mph, to 20. We arrived at the coffee house and saw the group had already left. We also met up with another rider at this point. I really need to get a Cycling Connection jersey. Both were wearing one and they seemed to know each other.

So, the three of us set out and used a rotating pace line which, embarassingly, needed to be explained to me. I did my best and we actually caught the group by Haven. So, now with the group, we continued the ride. I had decided to do the long ride, which included going up Mt. Baldy Road, to Shinn Road and then down to Mountain Ave. That’s a tough little climb there. My knee didn’t hurt too bad. Mostly, I was riding alone, though. The majority of the group went down Padua. I don’t know if the riders doing the long ride are that much faster than me, or what.

It was a good ride, though. I don’t mind riding alone as I do a lot of it. There were a few times where I felt pretty fast. I past a small group on cruising bikes in Rancho Cucamonga and it was like they were standing still. I caught a couple guys who asked me for directions. They were ridng with the group, but got separated it seems. I caught a kid who was solo. He had a decent bike and seemed to be a rider of some capability, but he was going too slow and I passed him. He either couldn’t or didn’t want to keep up with me as I dropped him immediately.

And, so it goes. I feel strong sometimes and others I can feel my lack of conditioning. Last time, all I did was get stronger and faster. But, this time, I remember what it was like to power up a climb without really caring much about it. I remember climbing Glendora Mountain Ridge Road and enjoying it! But, yesterday, going up both Baldy Road, and the climb up to the top of Day Creek were both exercises in will power.

I was stronger this time than last time. I got back to the Grind but I didn’t see any point in stopping. I had no money on me and I didn’t really know the rest of those guys. The friends I have in the Connection were on a different ride out to Pasadena and back. Some of you might be thinking (ha ha, I’m pretending people read my blog!), “Dude, how are you going to meet people if you don’t talk to them? Well, the thing is, I am a Socially Awkward Penguin.

That is, I just often feel like it’s very difficult to be gregarious with people I don’t know. I have a hard time just walking up and talking to people I haven’t met before. It’s uncomfortable. So, I just kept riding up Day Creek.

I headed down the Pacific Electric Trail, to Etiwanda, up to Banyan, across to Wardman Bullock up to Summit, then to Citrus and home. Forty-eight miles, total. I don’t know how much elevation I climbed, but it seemed like a lot. By the time I got home, my legs were fried.

We had a wedding to go to, so I got ready and we went over to the Mission Inn of Riverside. The ceremony was in the St. Francis chapel and it was nice. I thought it was touching that they wrote their own vows and that the groom even made a vow to be a good step-father to the children. I don’t what it is with me, age, trauma, or just plain sensitivity, but I found myself getting a little emotional as the bride and groom expressed their love and devotion to one another. Maybe it’s just that I know that feel, bro. I adore my wife and feel so lucky to be with her. So, it was a nice ceremony and romantic. The chapel was beautiful. I’d been outside the Mission Inn before, but not inside like this, so it was very interesting. 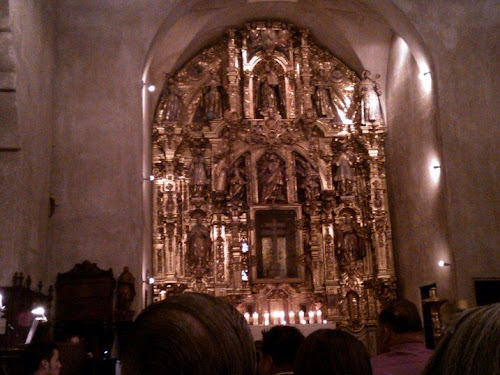 The reception followed. The meal was pretty darn delicious for hotel food. It wasn’t quite gourmet 5 star fare, but it was delicious nonetheless. The filet mignon was tender and light pink in the middle. The salad was very good and the cake was so good my wife stuck my hand with a fork when I made a move toward hers, for which I don’t blame her at all. Very yummy. Stairs, however, were not fun. My quads were so tired from the ride that I had to walk slowly down stairs, like an old man. My wife and I danced for a couple of songs when they played a little merengue/disco hybrid. We can never resist Elivs Crespo’s “Suavemente.” But, her back and my legs meant we quit after two more songs. But, it was still fun.